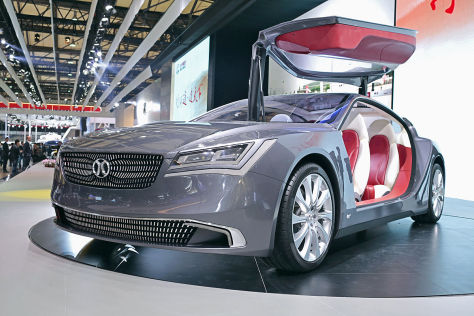 BAIC of China, who recently employed 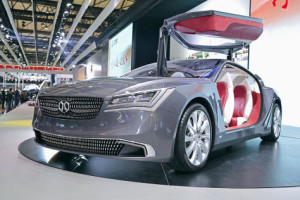 the services of famous actor Nicolas Cage to promote one of their cars, has shown the first teaser photos for their latest design showcase, called Concept 900, a vehicle which debuted at the 2013 Shanghai motor show last weekend. The shots may not be particularly revealing, but it shows potential, which shouldn’t be just skin-deep. Why?

Because the automaker has a lot of old Saab bits lying around in its factory (figuratively, of course), and they’ve been making a bunch of old 9-5-based sedans for a few years now, all of which are big and their proportions betray their Swedish connection, with long, low bodies and simple lines. Regarding the Concept 900, they have not released any specific data on it. 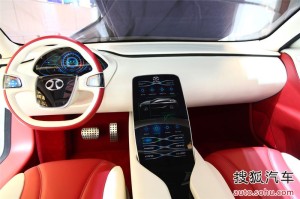 At least this way Saab lives on, albeit in a reincarnated-Asian-Frankenstein kind of way, and like all the tried and tested products we know, love and buy, it ended up being made in China.

Except their Concept 9600 Debut, the stand was quiet unimpressive and pretty much the same from last years show. Their EV (Electric Vehicle) got a lot of attention from Chinese buyers because of massive incentives given by the Government if citizens of Shanghai and/or Beijing decide to buy an electric vehicle.

The Government launched this initiatives by the beginning of this year in order to take measures against the major cities pollution problem. Under the central government measures, a rebate of up to 60,000 yuan ($9,625) is offered on the purchase price to buyers of battery-powered cars, while the Shanghai municipal government is offering an extra subsidy of up to 40,000 yuan and a free license plate.

Below you may find a summary of BAIC and my personal rating from the Shanghai Autoshow 2013: