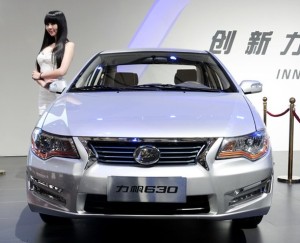 Based in Chongqing, compact sedans, microvans, and hatchbacks are among its offerings. The company was ranked the 88th largest in China in 2009.Abroad, Lifan may be best known for the small passenger cars it sells in developing overseas markets, but it also makes small dirt bike engines, entry-level motorcycles, mini-vehicles,and small and large commercial trucks. Other interests include manufacture of sports shoes and winemaking.

Lifan’s 2009 automobile sales were a modest 43,000, but the company still managed to place as China’s third largest exporter of cars. 2010 production capacity was estimated to be near 300,000,twice what it had been in 2006.Production capacity figures may consider whole vehicles and engines as discrete.

On the Shanghai Auto Show 2013. they launched there new Lifan 630 which had a good look at Lexus when they designed the grille.

Below you may find a summary of Lifan Automobiles and my personal rating from the Shanghai Autoshow 2013:

Be the first to comment “Lifan Automobiles – the Copycat” Cancel reply